How often do we actually move house?

Homeowners in Great Britain have been moving less frequently ever since the credit crunch of 2008, and new research has shown a continued trend towards lengthy residencies in most UK regions. The latest figures reveal that British homeowners move once every 19 years, on average. In many regions the amount of time spent in one property is far higher, at up to 30 years. 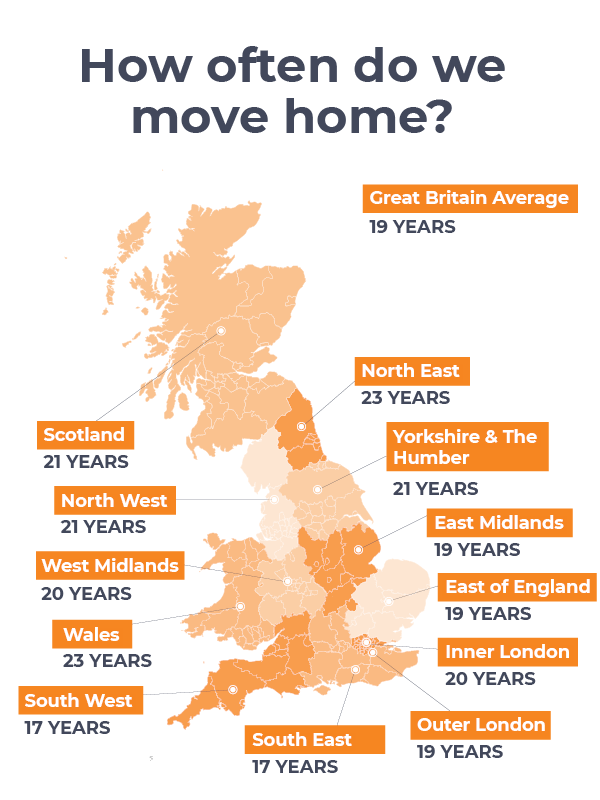 Regional differences are key in any statistical analysis of home ownership, and the discrepancies in average moving times across the UK are important to note. The lowest mean residency figures can be found in the south of the country. Look to regions such as the East of England, South West and South East and you’ll find that the average time spent in a property is around 17 years.

The north of the country has some of the highest residency durations. In the North East, and also in Wales, the average is a considerable 23 years. Other regions with lengthy mean residency durations include Scotland, the North West, Yorkshire and the Humber. All three of these areas have an average ownership time of 21 years.

It’s possible to narrow down these figures a little further, to discover particular towns and cities where homeowners are most and least likely to move. At one end of the spectrum we find the cities of Bournemouth, Brighton and Colchester. Here homeowners move more often, and tend to sell after 14-15 years on average. By contrast, cities such as Aberdeen, Kirkwall and Dumfries and Galloway in southern Scotland have some of the longest periods of residence. Homeowners in these regions are likely to sell after 36, 61 and 30 years respectively.

Speaking to This is Money, Hometrack’s Richard Donnell explained the change in property owners’ behaviour, suggesting that one of the principal causes is the current low inflation environment. Donnell said, “The shift to a low inflation environment has an important longer term impact as it erodes mortgage debt more slowly than when inflation is higher. Households cannot rely on inflation to shrink their debt in real terms as much as they did in say the 1980s, meaning longer periods between moves is a trend that is here to stay.”

The new data, collected from between May 2018 and April 2019, confirms that Britain's homeowners are increasingly staying put. Rather than moving, many homeowners are choosing to extend and improve their existing properties. With property values stalling in many desirable UK towns and cities, it’s not surprising that huge numbers of homeowners are opting to extend instead of selling. And as uncertainty surrounding Brexit continues, it’s likely that the length of time that UK homeowners spend in their properties will rise further still over the coming months.

For more statistical analysis and inside information on the UK property market, keep an eye on the latest news from TwentyEA. We’re here to help you better understand the industry, giving you an edge over the competition. Stay tuned.

← How many pints does your home cost?
Growth of the rental market & impact on the EA's revenue →