Property Market Prospects: 2020 and Beyond

We’ve all heard the recent talk of a “Boris Bounce” in property sales, but what does this really mean for the market? We asked our team of experts to dive into the figures behind the headlines, to reveal how far the Conservatives’ recent election win has impacted the UK property market, and what the political mandate of the Conservatives could mean for  property sales. 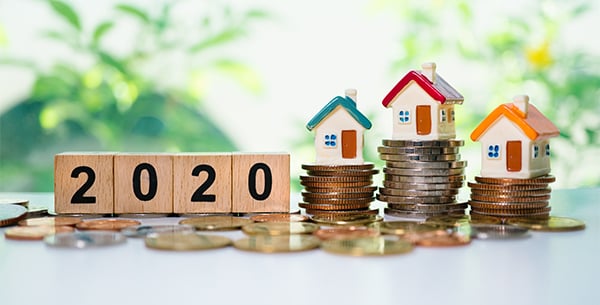 It’s no secret that the market has been hugely impacted by political uncertainty in recent years. However, the Conservatives’ recent landslide election win has gone some way to improving stability in the run-up to Brexit.

As the Brexit deadline edges ever closer, our analysts have been keeping a careful eye on emerging trends in the market. By focusing on specific homemover data and comparing recent findings with similar periods over the past few years, our analysts have been able to construct a clear and definitive picture of the UK property market as it stands today.

Our findings have revealed the true impact of recent political changes. The figures are also hugely powerful when it comes to making informed predictions on how the market could change over the coming year, and what Brexit might mean for property sales.

What do past figures tell us about today’s market?

We can’t attempt to understand the future without first looking back at the past. So, our team has completed extensive research into property transactions in recent years. Using data recorded by HMRC and UK HPI, we have created the following graph to reveal the volume of transactions recorded from 2006 to 2019. 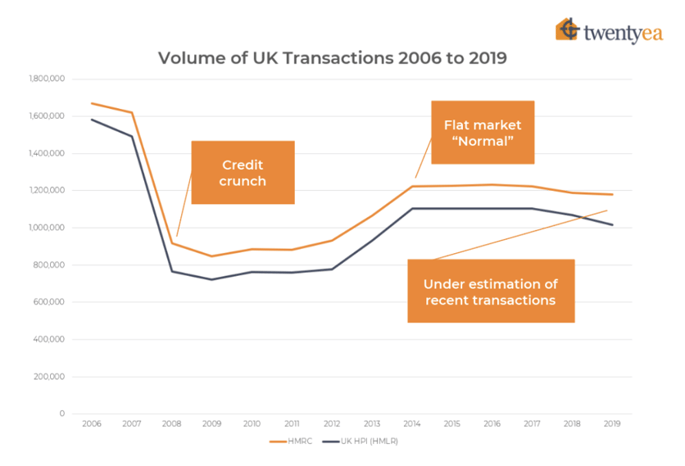 The data recorded by both organisations is broadly similar, and gives a clear idea of the impact that the 2008 credit crunch had on transaction numbers, and how this is affecting the market today. As you can see from the above graph, we are now experiencing a flat “normal” UK market for transactions, which has been consistent for the past six years.

Our team went on to examine property rental volumes since January 2016, and the results have been illustrated in the following graph. The key learnings here are that numbers of rental properties coming onto the market are on the rise, as are agreements between landlords and tenants to let a property. 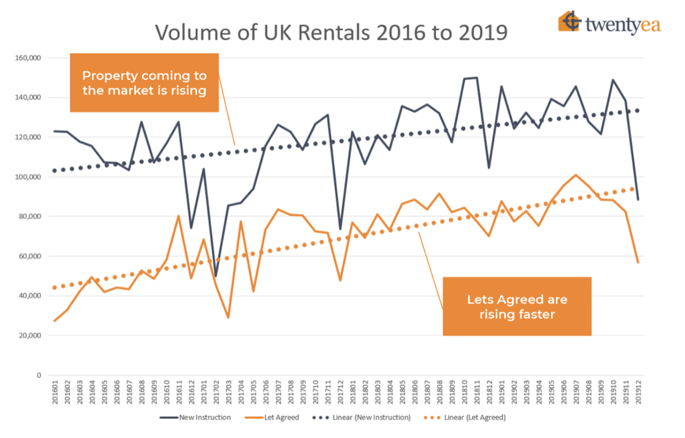 What does the data reveal about the market today?

The past week has seen an influx of newspaper stories focusing on a rapid increase in house prices, with attention grabbing headlines announcing the “best month…since 2007” and a price rise that’s the “fastest on record.” The Evening Standard even went so far as to say that the housing market was “back with a bang as buyers flooded back after the election.”

Whilst many agents remain cautious about the real impact of better political stability, most are optimistic about an expected upsurge in demand and resultant price increases. Some agents, such as Leaders Romans Group, Connells, Hunters and Humberts, have even displayed intentions to invest ahead of a market upturn.

How will the market fare over the course of 2020?

Stability is essential to the health of all markets, and the property market is a prime example of this. By examining the effect of parliamentary majorities on historic transaction figures, we can see similarities between the market’s recovery from the credit crunch and the flat market that we experienced from 2014. 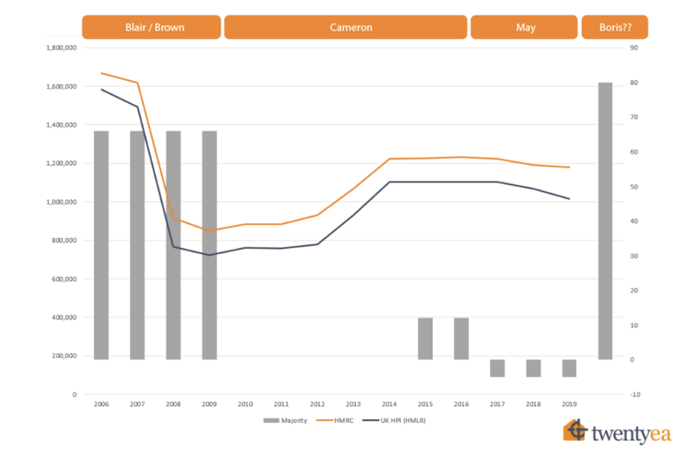 Boris Johnson of course divides opinion, but no matter what you think of his political leanings, there’s no denying the effect of his majority win where stability is concerned.

New House Builders are a good indicator of the buoyancy of the market; these companies invariably invest ahead of the curve on growth. And looking at the period from June 2019 to the end of the year, we can see that over 170,000 new homes were built - the highest number built during this period in the last 11 years.

What about the Boris Bounce?

Are we really experiencing a ‘Boris Bounce’? Well, the data suggests that we are, and have been since the early days of the current Conservative majority.

When we look at data from week 51 of 2019 onwards and compare this with the previous year, we can see that whilst property coming to the market (new instructions) is down by 7%, sales agreed (SSTC) are up by 6% and exchanges are up by 3%. So, we have already seen improvements in the market since the December 2019 election.

What does the data really tell us about the impact of political change on property sales?

We are now entering a period of stability, the like of which hasn’t been seen since the Blair years. Brexit is still on the horizon, but we can now expect Britain’s exit from the European Union to be a gradual process which will not significantly dampen improvements in the UK property market.

The wealth of the UK population will sustain a prosperous housing market over 2020 and beyond, and recent investments by new house builders and estate agents support this optimism. December 2019 saw the GfK Consumer Confidence Index rise by three points, adding further weight to positive market predictions.

TwentyEA data, expert opinion and wider market trends suggest a bright future for the UK property market. Our data shows that transaction numbers are likely to rise by over 5% in the coming year, with the effects of Brexit taken into account. Stability is key here, and the new political stability that we have experienced in recent weeks should improve the market by a considerable degree.